How to Train Your Dragon Birthday Party!! 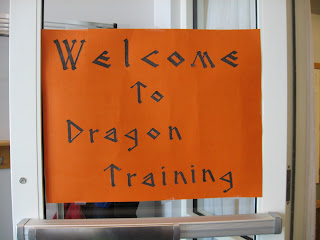 Well, it was a lot of work and a lot of stress, but i pulled it off! The party was a blast, and here i am to share some highlights!

We started out with a light lunch. I put together some basic snack foods, trying my best to focus on healthier foods (and some not so healthy). I made them fun by giving them names: 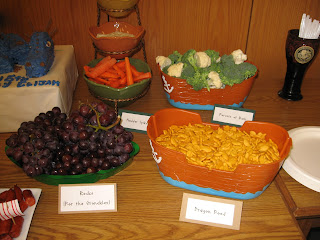 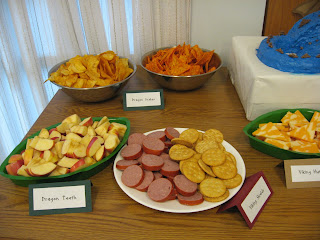 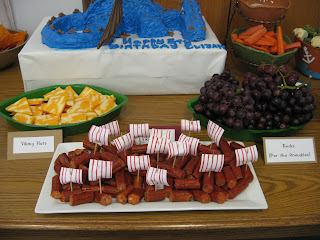 (you can't see it too well, but the cheese "viking huts" were cut into squares and triangles to make little houses)
I didn't get a picture of the red punch, which was labled "Lava". One of the boys wouldn't drink it because lava is too hot to drink!! hahahaha!

Then we outfitted the kids for the dragon hunt: 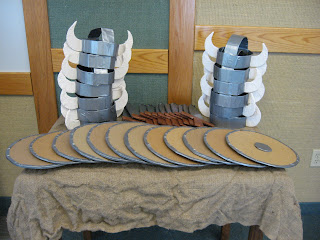 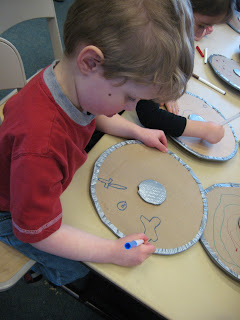 The kids decorated their shields with markers, then grabbed their swords and hats and practiced fighting the balloons! They had a blast hitting the balloons around the room with their swords. One of the boys accidentally popped a balloon, and his mom exclaimed "Good job! You killed the balloon!" After that, R followed me around for a good 15 minutes begging me to help him "kill" a balloon! (i didn't comply because i absolutely hate popping balloons! I know, i'm no fun.)
Then we went on a dragon hunt, using the dragon manuals. I had hidden candies and toys around the building, with pictures of different dragons on each of them. They were given their treat bags to put their dragons in as they found them. 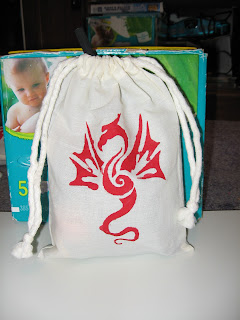 I used this tutorial for the treat bags (link opens a pdf file). I did a google search and found a dragon image i liked, printed it out onto cardstock and cut the pieces out with an x-acto knife. Then i used the stencil to apply red fabric paint to the bags. I should have made a few stencils - after about the fourth or fifth bag, the paint started leaking under the edges. Good thing kids aren't as nitpicky as i am.
After the hunt, we played games. We fed the dragons: 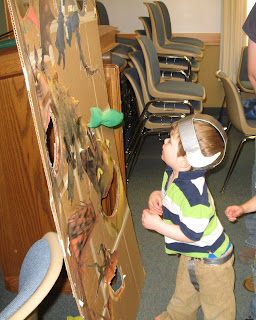 And used the dragon tails i made to have a relay race. 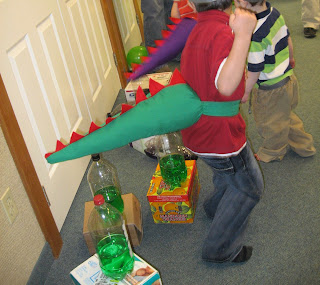 Each child got a chance to knock over three 2L pop bottles. I filled them with a little bit of water and food coloring to make them heavier and a little tougher to knock over. I also had to stand them on boxes to make them taller.

After the games, it was time for presents, then cake!! And i have to say, i LOVED this cake! 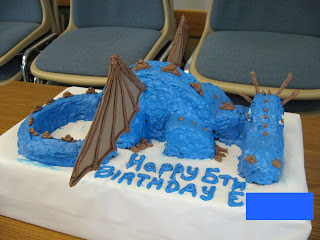 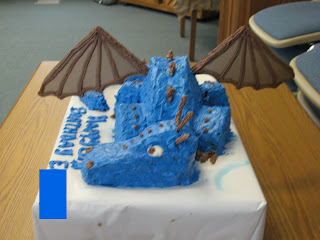 I found the instructions for it  here. It's a "limited access without a paid membership" site, but i gleaned enough from the photos i could see to recreate it. I was too cheap to buy up a bunch of candy, so i made all the pieces with icing. i also cut the tail wrong, which worked out better anyway, because it created the extra piece for the head, which i thought looked great!
The wings are brown cardstock. I "glued" some bamboo skewers to them with chocolate icing, then piped the veins on to give it a little something extra. 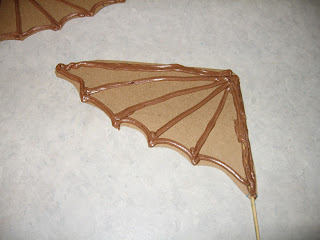 Since the cake wasn't quite enough for all our guests, i made the viking hat cupcakes, this time with little sleeves i made on the computer. There were intended to be the iron rim on the bottom of viking helmets. I still can't decide whether i like them or not, but there you go. 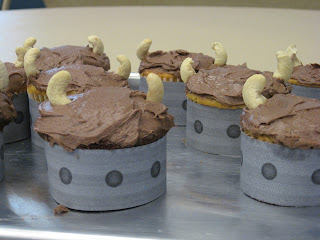 I ran out of colored ink, which is why they look a little strange, but thankfully they were supposed to be gray anyway.
After the cake, we did the Wooden Spoon Toothless craft, and i was so busy helping the kids that i didn't even get one photo of the whole activity! (sad face)
In their treat bags, they got all the dragon hunt treats along with their manuals and a little coloring book. 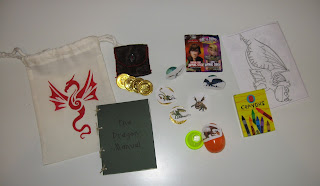 I found printable "How to Train Your Dragon" coloring pages here, then made them into a little booklet and included an inexpensive box of crayons from the department store's party section. I made the little embroidered treasure pouches and filled them with little plastic gold coins, from the party section of the dollar store. Inside the 'monstrous nightmare eggs" were those little "bug-eye" things that multiply everything you look at through them (what do you call those??). M's mother brought up the "How to Train Your Dragon" treats from Idaho on her last visit - chocolate dragon eggs and FunDips with characters on them! A great addition! They also got to take home their hats, swords and sheilds, and their wooden spoon Toothless. 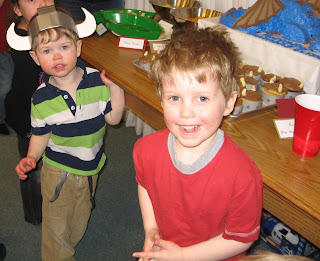 It's a sad fact of life that the hostess doesn't get to really enjoy the parties she puts together because she's too busy hostessing! I didn't get as many pictures as i would have liked, and it seemed to end far too quickly, but the kids all had a blast, and that's what's important!

I always love to hear your thoughts, but please keep it kind and constructive. Thanks so much!

CAN I USE YOUR IDEAS?

Please do not use any photos without prior permission.

You may share any of my ideas anytime **on the condition** that you mention where it came from and link back here.

I share my ideas, tutorials, even the PDFs I work hard to create, free of charge for those who would like them. I do this to help YOU and to make your life a little bit easier.

I try whenever possible to link back to ALL the sites and posts that have inspired me, and I hope you show enough respect to me and all my hard work to do the same.